Be still my heart

I’ve wanted a PC Engine LT ever since I saw the sexy little laptop-esque system in the pages of an early issue of Diehard GameFan magazine.

So why haven’t I bought one? Well, they’re expensive. Really expensive. A recent eBay search, for instance, brought up auctions for three used, boxless systems, with the cheapest priced at $550 and the most expensive priced at $799. 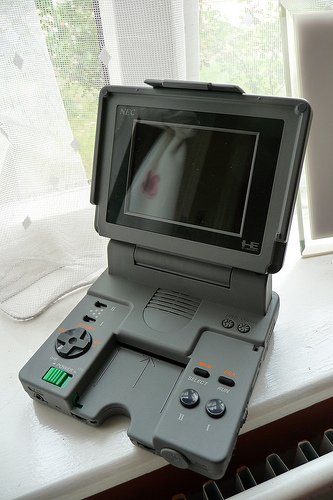 A guy who calls himself dcmaster on Flickr recently acquired the PC Engine LT above for a bit less than that. In fact, said system–bought at a “car boot sale,” whatever that is–set him back just £5 (approximately $6.75).

Assuming the thing works, I’m not sure whether I should pat this dcmaster fellow on the back (virtually, of course) or try to put a hex on him.