At least, that’s what the editors of TurboPlay magazine suggested all the way back in 1992–just before Taito’s Mizubaku Diabouken (aka Liquid Kids) hit the streets in Japan. 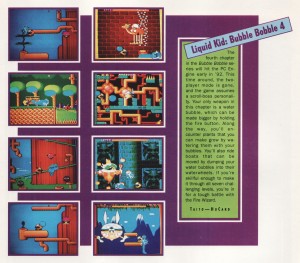 My initial reaction to that suggestion was something along the lines of “nuh uh!”–but after giving it some consideration my reaction has softened a bit.

After all, the series’ other (actual) entries–Bubble Bobble, Rainbow Islands and Parasol Stars–don’t share enemies, protagonists, settings or weapons, so why would part four–with its waterbomb-wielding platypus–be any different?

All that said, Mizubaku Daibouken isn’t, as far as I can tell, officially called chapter four of the Bubble Bobble saga–although I suppose that may have been something the game’s creators considered early on.

Oh, and by the way, this is ‘The Story of Bubble Bobble III’

You know, I’ve always wondered why the folks at Taito (and, later, Working Designs) didn’t do more to play up the fact that Parasol Stars, one of my all-time favorite PC Engine games, was supposed to be the third game in the famed Bubble Bobble series.

Sure, they mentioned that fact in a subtitle (as seen in the ad, which appeared in an old issue of the American TurboPlay magazine, below), but said subtitle is so small and subtle that it’s all but lost in the cacophony that surrounds it.

Maybe the brass at Taito decided against trumpeting Parasol Star‘s connection to that classic series because it wasn’t created by Fukio Mitsuji, the man behind both Bubble Bobble and Rainbow Islands (aka “The Story of Bubble Bobble 2”)? I guess we’ll never know.