On being an anal-retentive game collector

Hello. My name is Bryan, and I’m an anal-retentive game collector. (All together now: “Hi, Bryan!”)

I know, that’s not as bad as being addicted to drugs or drinking to excess, but it’s bad enough. After all, it causes me to spend a lot more money on games and systems than I should. 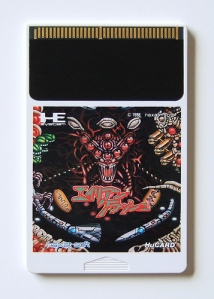 Wait, it doesn't come with a case and manual? No thanks.

For instance, I recently bought a bunch of complete-in-box Famicom cartridges (as detailed in this post on my other gaming blog). Although I believe I got them at a good price, I certainly paid more for them than I would have had I bought them “loose” (without boxes and manuals).

OK, I’ve owned up to my shameful, anal-retentive ways. How many of you are going to do the same?

I’ve always been a “doodler,” but for the last few years I haven’t done much of it. That all changed a few weeks ago when I picked up a set of markers my sister-in-law bought me as a Christmas present and (finally) put them to use.

Although I’ve produced quite a few game-related doodles in the past week or so, the one below is the only one that has to do with the PC Engine.

If you’re at all interested in seeing more of my doodles, check out this Flicker set. If you want to see some of the photos I’ve taken of my games collection (which includes a number of PC Engine system and game shots), check out this set.

Looking to pick up a few imports?

If so, you should head over to wolfgames.com tout de suite (right away), as the French like to say.

This Internet-based import shop is attempting to clear its shelves–likely for good, unfortunately–and as such everything is currently 30-50 percent off, depending on how many games you buy.

Anyway, a complete, up-to-date list of the store’s stock of HuCards and CD (and Super CD) games can be found here.

I’ve been a fan of the Konami cute ’em up Parodius Da! for many years, but until a few minutes ago I didn’t know that the game’s special (omake) stage features a trio of secret bosses–all of which can be seen in the following video:

Of course, my lack of knowledge in this area likely stems from the fact that I absolutely suck at said omake stage.

By the way, a number of those 63 games are absolute winners, including (but not limited to) Air Zonk, Alien Crush, Blazing Lazers, the first two Bonktitles, Legendary Axe, Military Madness and Splatterhouse. A few of them aren’t complete (i.e., they’re missing a manual and/or a case), but it’s still a pretty good deal–if you have 1,000 bucks to blow.

i was a teenage pc engine fan
Blog at WordPress.com.